The initial version of this survey was completed on January 12th, 2018. Please ignore the dates and times given for the individual posts: they were manipulated to enable a thematic arrangement in the blog archive. Now I shall be adding new material, correcting mistakes, uploading better illustrations, and re-formatting. To avoid having to re-number the types should a tremendously rare singleton suddenly need to be accommodated, I have kept Type 24 (“Miscellaneous Erotes”, presently consisting of earlier coins, some Roman Imperial coins and medallions, artefacts, lead seals, and tesserae) for that eventuality.

Here is a provisional listing of those who’ve worked on or in different ways helped with the project or been consulted (the list is alphabetical, and doesn’t give academic titles). Please contact us if we’ve forgotten you. Sincere thanks to everyone! 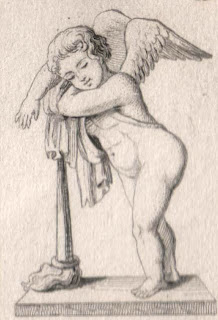 Posted by Britannicus at 4:40 PM No comments:

Email ThisBlogThis!Share to TwitterShare to FacebookShare to Pinterest
Labels: Thanks and Acknowledgements

But None of These is Eros

Eros, naked and male, is not to be confused with other winged beings or naked youths. 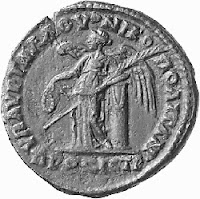 For example clothed, female figures like Nike, here on a coin from Nicopolis ad Istrum (Moesia). 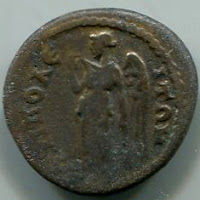 Or Nemesis, here on the reverse of a coin from Tripolis in Lydia 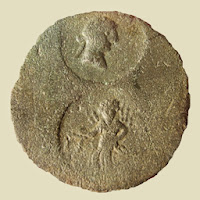 or as an unattributed provincial countermark (= Howgego, GIC 283). 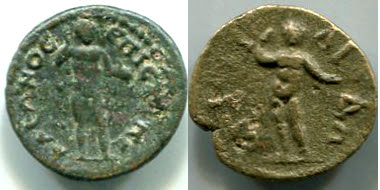 More mysterious is the youth holding a bird in his outstretched hand on coins of Pergamon (Mysia) with obverse type of helmeted head of Athena, who was identified by Imhoof-Blumer in 1908 (Zur griechischen und römischen Münzkunde, 2) as one of the minor “gods of healing” associated with Asclepius. These included Telesphorus, normally represented as a little cloaked figure, however, rather than as a naked youth, and Euamerion. Two reverses are shown here, of coins struck by Ioulios Pollion in the time of Hadrian (l.) and by Diodoros in the time of Commodus (r.). 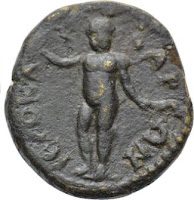 There are also nude boys depicted on the reverse of Hadrianic coins from Hierocaesareia in Lydia (photo courtesy of Numismatik Naumann GmbH), but these too are not winged. 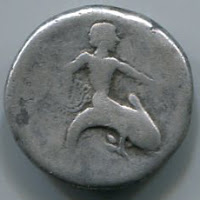 If the boy on a dolphin isn’t winged, he probably isn’t Eros. On this coin, from Tarentum in Italy, it is Taras. For other dolphin-riders, see Type 21. 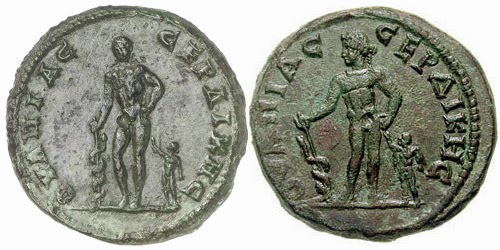 Another mysterious reverse type comes from Serdica (Thracia) and shows a naked young god with a serpent-staff; by his side is a small figure, reaching up towards him (illustrations). The two figures are not Aesclupius and Eros, but Apollo the Healer and, possibly, his son Aesculapius; alternatively, Telesphorus (as Patricia Lawrence has pointed out, the identification is difficult because of the lack of attributes; see the discussion of Aesculapius, Telesphorus, and Co. in Hans-Joachim Hoeft’s Münzen und antike Mythologie, 2011, pp.279 ff. and 289 ff.). Here are two variants: on the left (photo courtesy of Lübke & Wiedemann KG) the tiny figure is naked, while on the right (photo courtesy of Classical Numismatic Group, Inc., www.cngcoins.com) he is wearing a chlamys over his shoulders, which might easily be mistaken for wings on a worn specimen of the coin. 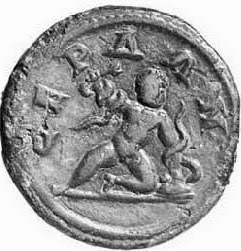 It is the infant Heracles (and not Eros) who is portrayed carrying the club and lionskin on a coin of Heracleia Pontica in Bithynia (SNG von Aulock 423), or fighting, here, on a coin from Serdica (Thracia), with the serpents sent to kill him by the jealous Hera (photo courtesy of Lübke & Wiedemann KG). 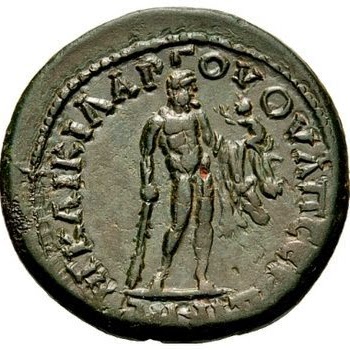 Nor should his son Telephus, shown here with Heracles on another coin from Serdica (photo courtesy of Dr. Busso Peus Nachfolger), be mistaken for Eros. Compare the pose of Telephus on this coin with that of the child (Eros?) on the coin of Nicomedia (Type 42), who seems to be floating in front of Heracles rather than squatting on his arm. 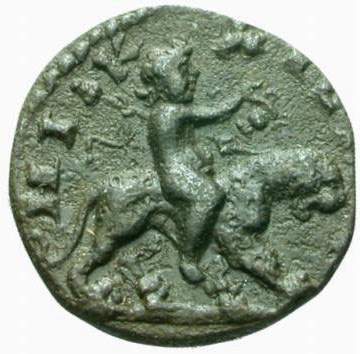 But the child most easily mistaken for Eros is Dionysus, shown here on a coin of Geta from Nicaea (photo by courtesy of Münzen & Medaillen GmbH), riding on a panther. 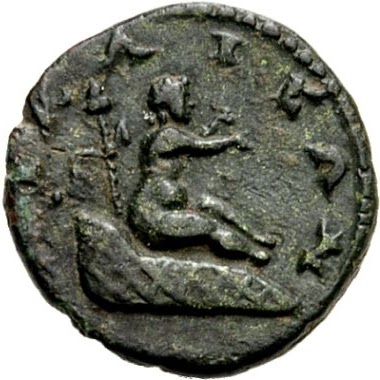 Dionysus is also represented as a child in an improvised cradle, actually a corn-sieve for separating wheat from chaff, here on a coin of Septimius Severus from Nicaea in Bithynia (photo by courtesy of Dr. Busso Peus Nachfolger). 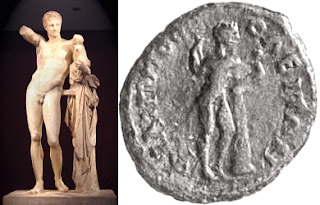 On other coins he is shown being looked after by various helpers, including Silenus, on an extremely rare coin of Sardes, illustrated on p.295 of Hans-Joachim Hoeft’s Münzen und antike Mythologie, or by Hermes, here on an extremely rare coin of Septimius Severus from Philippopolis in Thracia, misread by Varbanov (1252) as “Naked Apollo stg. r., resting on column and holding bow (?)”, but reproducing the famous statue by Praxiteles at Olympia, of which the Philippopolitans presumably had a nice copy. There is a similar coin (of Marcus Aurelius Caesar) from Anchialus (AMNG 427), also exceptionally rare. 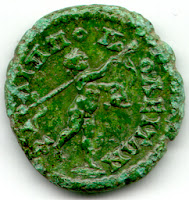 On charming coins of Marcus Aurelius at Philippopolis (Thracia), Dionysus (or a Baccchic child) is shown dancing, holding a thyrsus and a cantharus (from a private collection, photo by permission); there is a cruder version of the same type for Commodus at Nicopolis ad Istrum (Moesia). 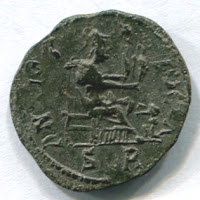 This coin of Antiocheia in Pisidia was sold by a renowned auction house as a coin of Gordian III with reverse of seated Aphrodite with Eros! They must have been thinking of Type 28. The figures on the reverse are Roma and a crouching captive, and the coin was struck under Volusian (RPC IX,1278). 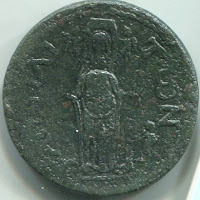 On this coin of Gordian III from Phaselis (Lycia) the figures holding the veil of the cult figure of Aphrodite are clothed, not nude, and therefore Nikai rather than Erotes (RPC VII,2, 21674*).

Finally, there are very rare representations of the naked Hermaphrodite on provincial coins, including the famous statuary type of the Sleeping Hermaphrodite (there are many surviving Roman copies of this risqué statue), on a coin of Augusta Trajana in Thracia (Varbanov 847, misread as “Dancing maenad (Genius?) naked, stg. facing, hd. r., holding veil in raised r. hand”, and 854 f., “River-god swimming r.”), 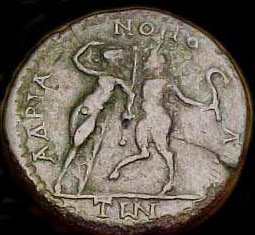 and a remarkable coin of Septimius Severus from Hadrianopolis in Thracia (Varbanov 3392, though wrongly described) that shows Hermaphrodite dancing with Pan (photo courtesy of Peter G. Burbules).

Posted by Britannicus at 1:57 PM No comments:

Email ThisBlogThis!Share to TwitterShare to FacebookShare to Pinterest
Labels: But None of These is Eros

Doubtful: Eros in a Temple

The existence of coins with this reverse type remains unconfirmed. The two “sightings” are not from mints that you might expect, like Thespiae in Boeotia or Parium in Mysia, but from Dium in Macedonia and the Koinon of Bithynia, and both are uncertain.

Mionnet (Supplement III, 414) describes a coin of Severus Alexander from Dium, but with an obverse inscription not listed in Varbanov. I suggest that (if the coin is indeed from Dium) this is probably a misreading of a worn coin with the well-known reverse type of Asclepius in a temple.

There is a Koinon of Bithynia coin of Hadrian (Waddington, Recueil général, 42) that purportedly shows two statues above the pediment of an octostyle temple: a winged figure (Eros?), on the left, pursuing a naked figure, on the right. The coin is not illustrated, and is described as having been seen “in trade”. Its existence has not been confirmed by RPC III. More certain are the coins of Hadrian and Sabina with the same reverse of an octostyle temple (the temple of Rome and Augustus at Nicomedia)  including a tiny figure of a “sacrificing Genius” in the pediment (RPC III, 987, 1013-14, 1023-24), but hardly an Eros (the same figure is shown full-size on RPC 965).

Posted by Britannicus at 12:03 PM No comments:

Email ThisBlogThis!Share to TwitterShare to FacebookShare to Pinterest
Labels: 58 Eros in a Temple
Older Posts Home
Subscribe to: Posts (Atom)